Happy Friday!  I love a bride who includes her dog in the wedding.  Erika Brown Photography had the pleasure of photographing a very special wedding that included Oliver, the ring bearer. 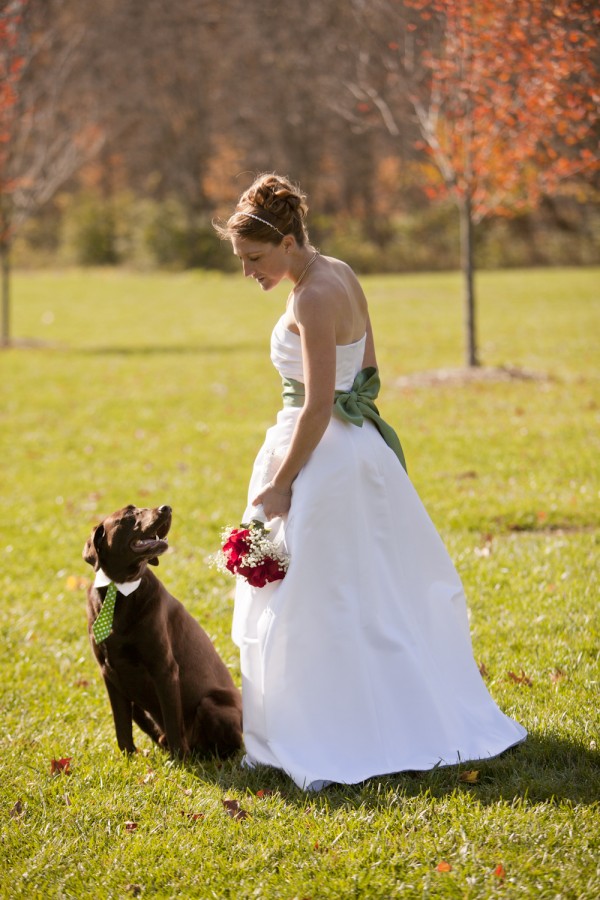 From Meggie:  “Oliver is a Chocolate lab and will be 3 years old in November.  I met Oliver when he was 4 months old by answering a ‘free to a good home’ ad on Craigslist while I was in graduate school.  He was found wandering the roads of a neighborhood and rescued by a kind woman who was not able to keep him.  I train therapy dogs and am very picky about the personality of the dogs that I rescue.  I was hesitant about Oliver at first because, on the day I met him, he stole the last slice of gourmet pizza off the table right in front of me!!!  I agreed to keep him overnight as a ‘test run’ and, during the span of 8 hours, he completely won me over and I have never looked back.  He is incredibly calm and even-tempered.  In fact, during his training, he accompanied me to my classes in graduate school.  I actually had a professor ask me if there was something wrong with him because he was so very calm for such a young dog!  He has served as a therapy dog while I was in graduate school studying Clinical Psychology and helped a couple of children overcome their fear of canines during exposure therapy sessions.  He never ceases to make me laugh on even the most somber occasions.  And THAT is more than I could ever ask for in a companion.”

About Erika Brown Photography:  Based in Atlanta, GA, Erika is  a wedding and engagement photographer.

Just in time for the holidays,  Pretty Fluffy and Chic Sprinkles share the cutest, simplest DIY  dog toy ever!

Be a  Secret Santa to a Shelter Pet!

I’m loving all the great prizes in the Advent Calendar for Dogs!  Every day there is  a new giveaway!

The Daily Dog Tag’s newest Pinterest board:  Gift Ideas for a Girl and Her Dog.

If you have an upcoming pet related event and would like to have it listed here please email rescue (at) dailydogtag.com.