I can’t help but think it would feel more like spring here if Theo was wearing one of these Dapper Dog Bow Ties like Buggsly!  It isn’t often that I get really excited about spending money, but I seriously can’t wait to buy one of these ties!    Buggsly isn’t just looking good in the bow tie, he is the inspiration for it as well as an incredible new jacket for dogs that is: waterproof, windproof, ec0-friendly and has reflective accents for high visibility. 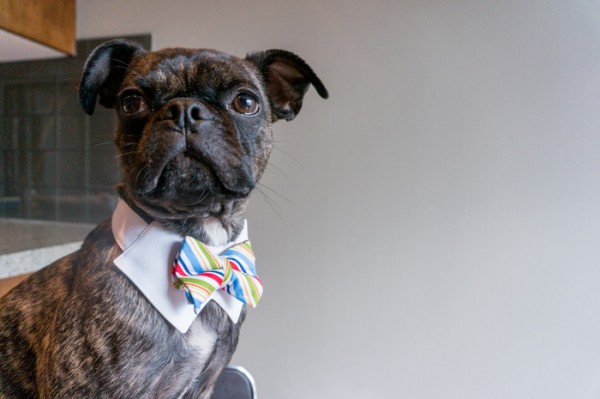 From Cassidy:  “Buggsly is 16 months old, and has been a part of our family since February 2013. He is a Bugg, meaning he is half Boston Terrier and half Pug, and this cross comes out fully in his personality. Like Pugs, Bugg is very social and loves people and other dogs alike. He is an avid snuggler who, given the chance, will lie belly up getting a massage, snoring loudly the entire time. From his Boston Terrier half, he gets his energy and agility. Bugg is one of the most athletic does that I have ever seen. We live in Vancouver, BC, and usually take him to the dog parks around our home to get exercise. His favourite thing to do is chase after balls. He will race after the ball and attempt aerial moves, all in the attempt to catch the ball mid air.

After we had Buggs for about 6 months we began developing a jacket.   Buggsly™ Black Label is a line of engineered dog jackets with an emphasis on safety, functionality, comfort, and care for the environment. More information on our jackets can be found at www.buggsly.com.”

In order to make these jackets (and bow ties) a reality, Bugglsy Black Label has a Kickstarter, but there are only a few days left to order a product at a discount. These ties and jackets will be made in Vancouver, BC and are made of environmentally friendly materials.

International Happiness Day with Two Pitties In the City

Yoga Has Gone To The Dogs

The Dogs of the Walking Dead

Your Dog Could Be The New Orvis Cover Dog!

If you have a dog event that you would like to be listed here, please email rescue (at) dailydogtag (dot)com.