Arlo, the Great Dane-Pit bull mix is so photogenic!  He joined his family and Debra from misterdebs photography for a snowy dog-friendly maternity session in South Lake Tahoe. 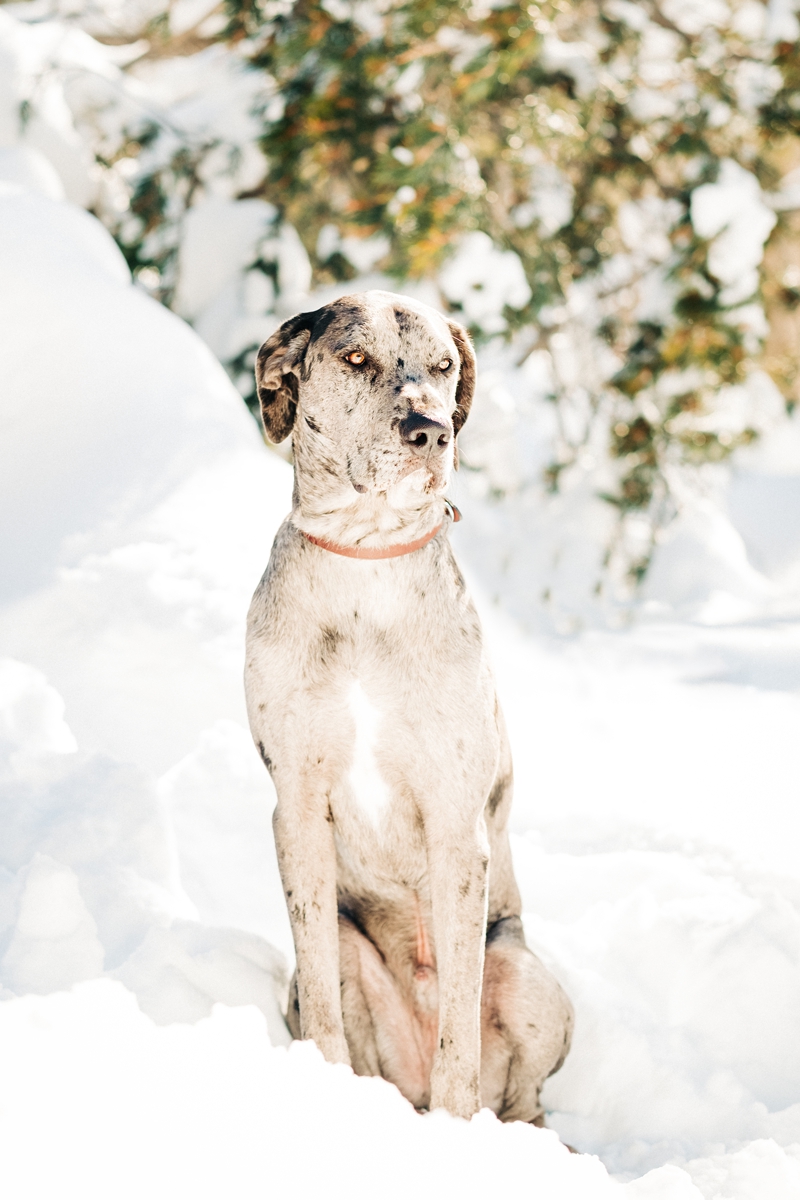 From Debra:  “There is something about snow that definitely adds a little extra magical touch to photos, and we were blessed to have clear skies and sun on our snow photo session. 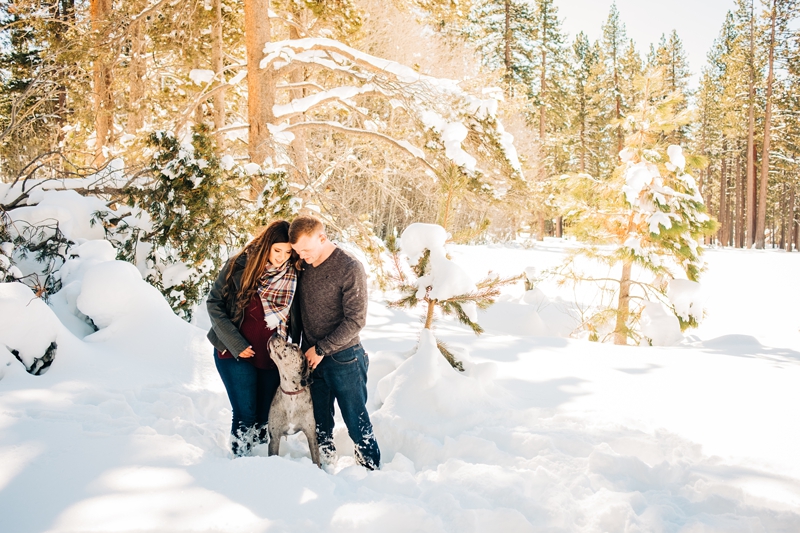 Maddison and Jason are expecting their first child in June. So they decided to celebrate their baby (while also combining Jason’s love for snow) by having photos done in South Lake Tahoe with their pup, Arlo. They got Arlo just before their other Great Dane died, so Arlo helped them through the healing process. 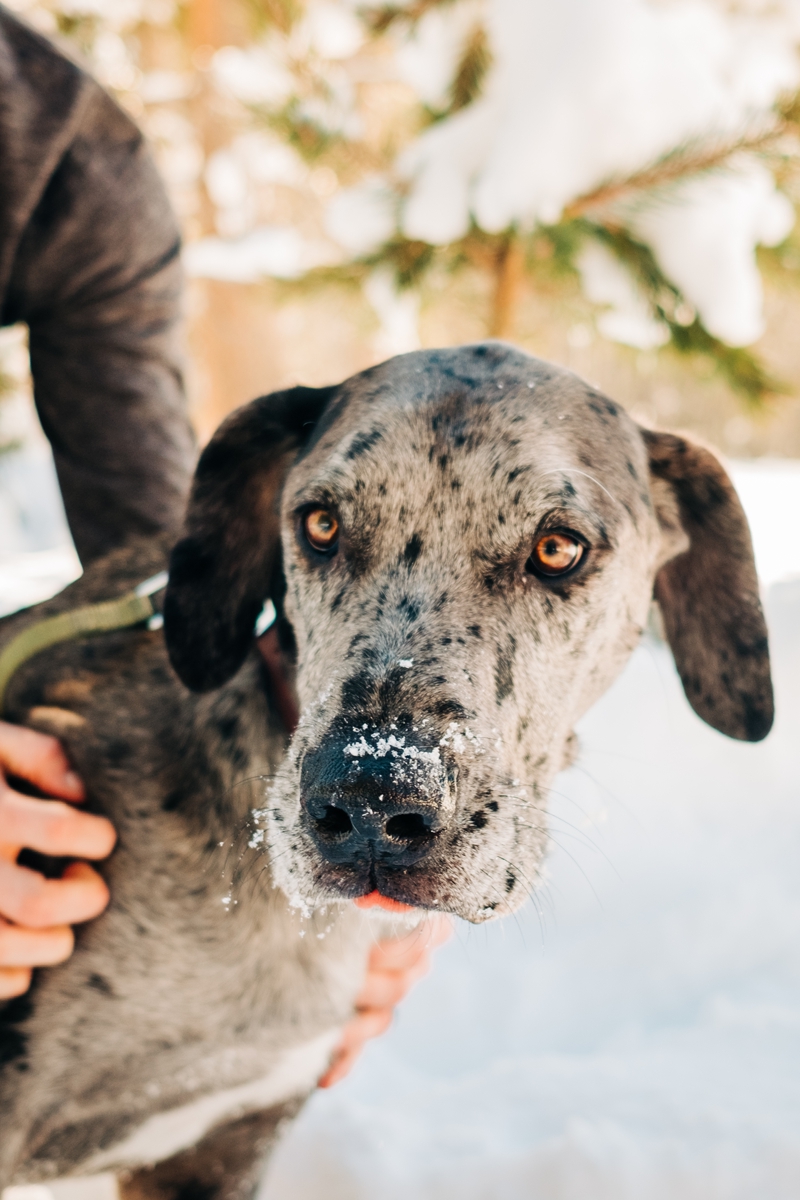 Arlo is a Great Dane/Pit bull mix, so he’s almost like a mini-Great Dane! He loves sleeping on his bed and eating bully sticks, which are a dog’s two loves in life. Arlo wanted to run around and play in the snow instead of sitting still to take some portraits with his humans. He also was a bit cold, and Jason tried to put a jacket on him, but Arlo was not amused. 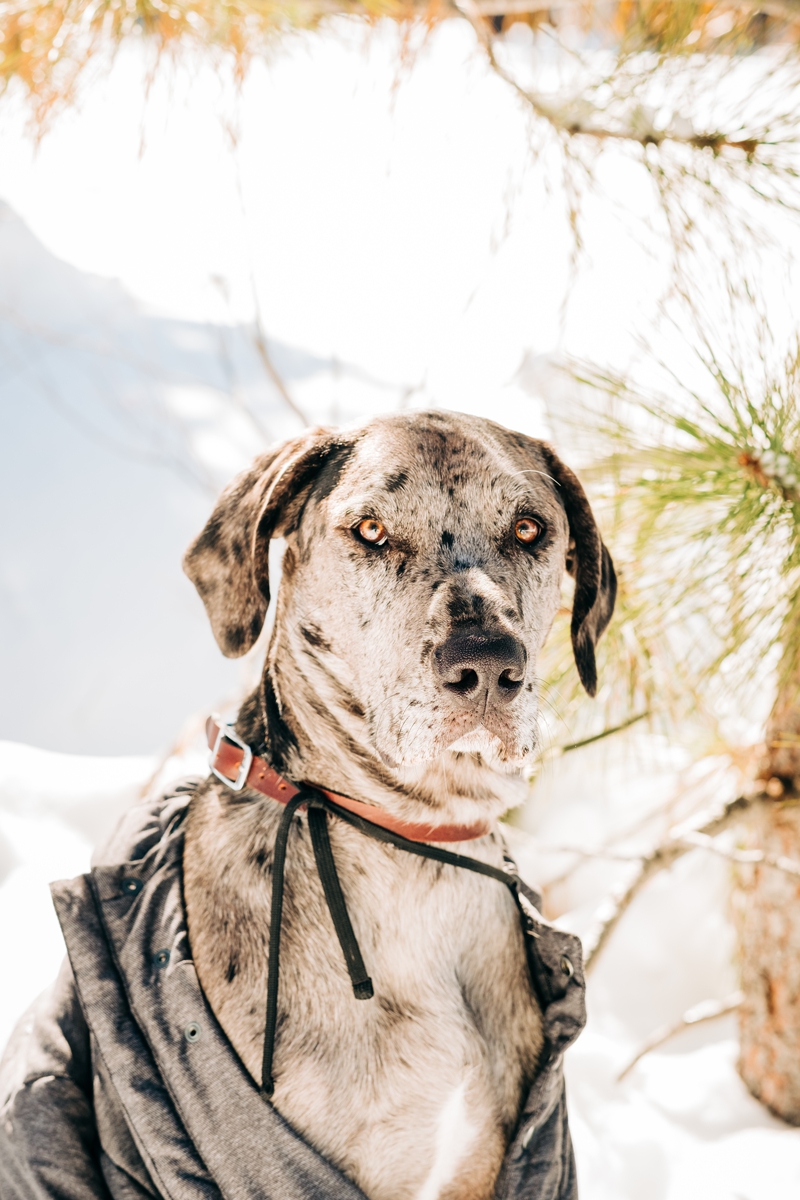 We threw snow around, and he ate some snow out of Jason’s hands, thinking he had treats or something. He is a dashing one year pup with so much love to give.” 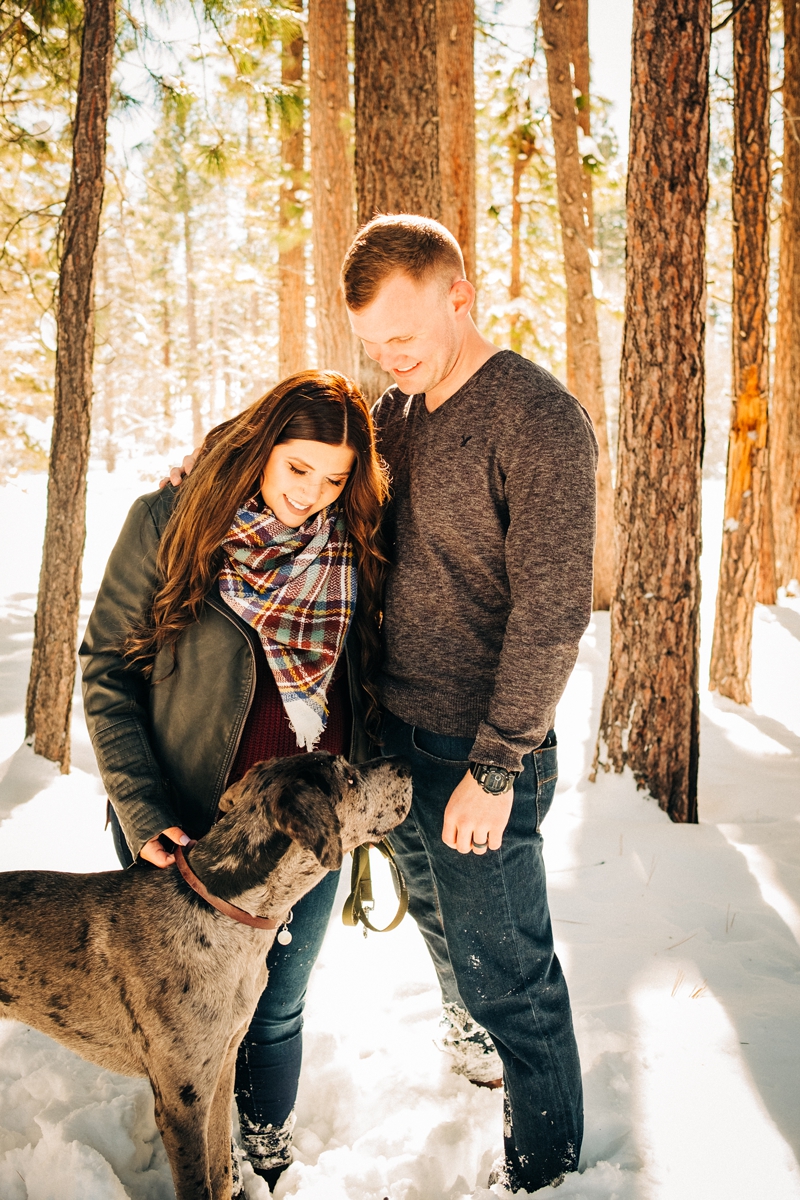 From Maddison:  “Jason and I absolutely loved the way our snow photos turned out! Let me tell you, it was ridiculously cold and wet, but it was worth it in the end. Debra is an amazing photographer and just an awesome person overall! She is an extremely hard worker, and you could see that in her while she was taking our photos.

Our now one year old Great Dane/Pit-bull loved taking snow pictures! Although Arlo would have preferred to run free and eat the snow, he wasn’t camera shy at all. My best friend has his sister that is the same Merle color- they get to see each other all the time. When they are around each other, you better get out of their way because they aren’t moving for you! 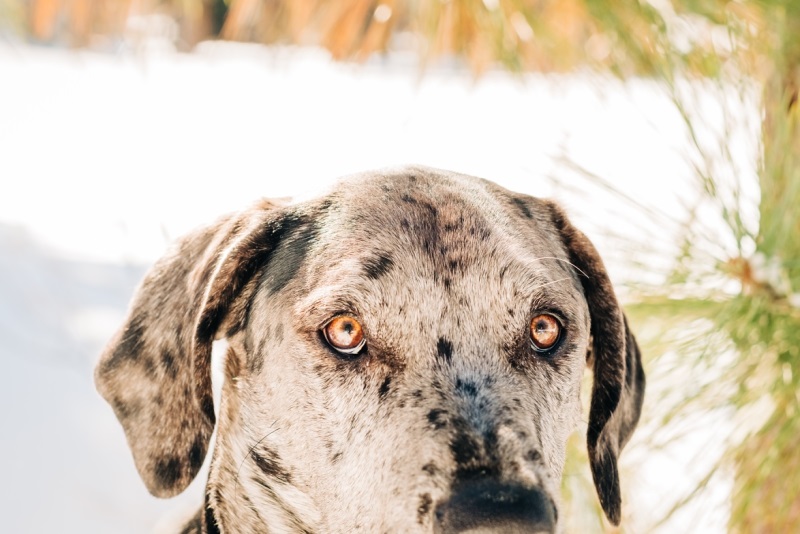 We originally got Arlo so that he could grow up to be like our other Great Dane and for him to have a friend. However, shortly after we got Arlo, Diesel passed away at almost five years old. We love Arlo so much- he is so spunky and such an amazing dog! Jason and I both know he will be an amazing big brother to our first human baby that is due June 13, 2019!” 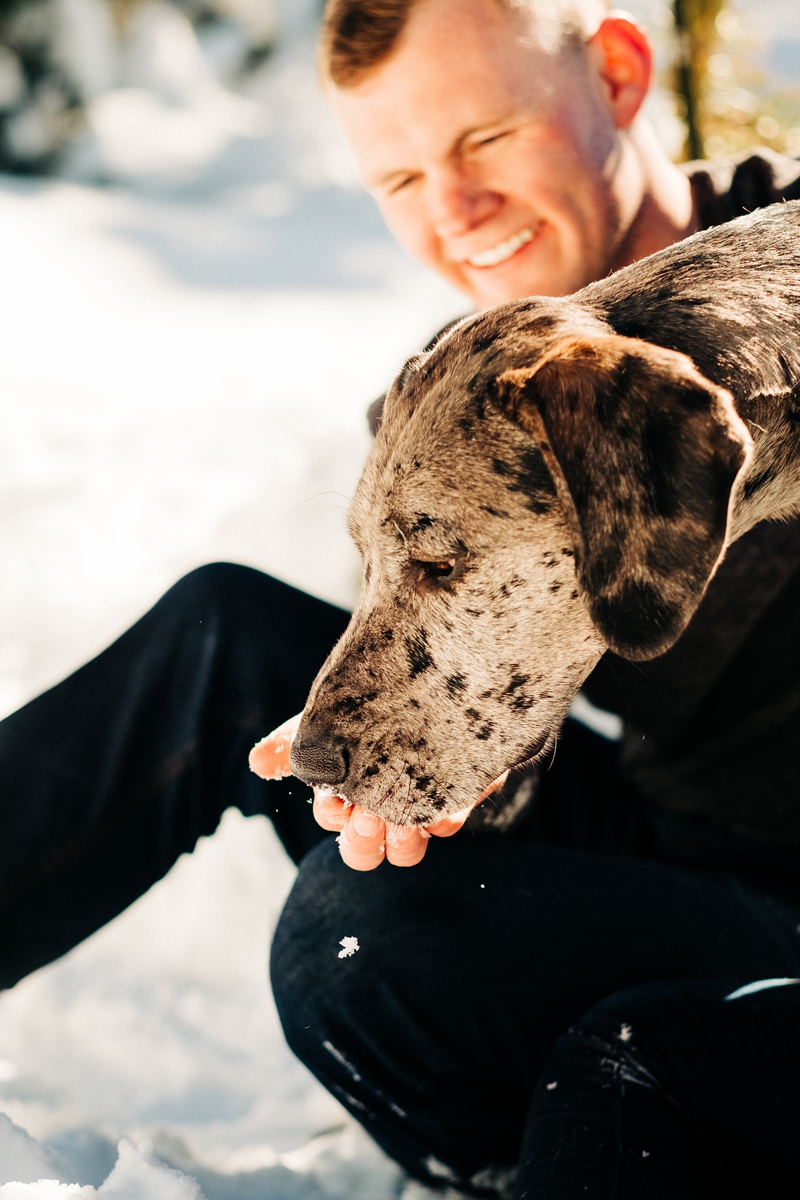 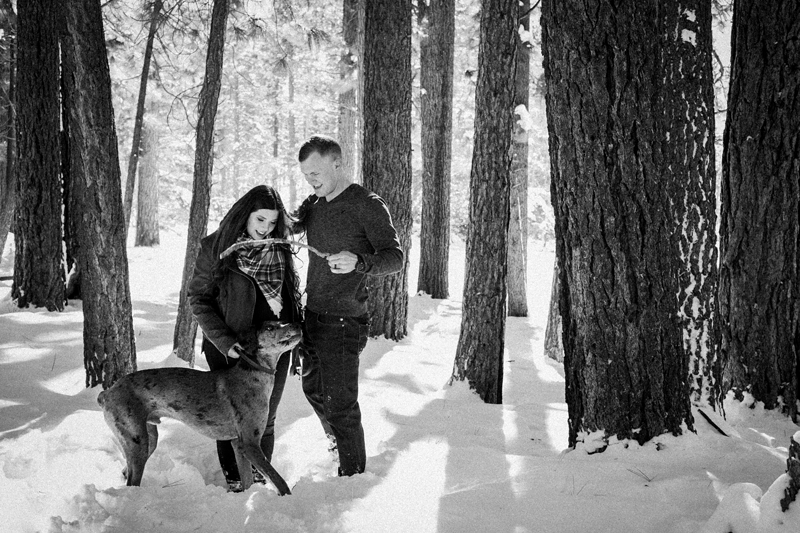 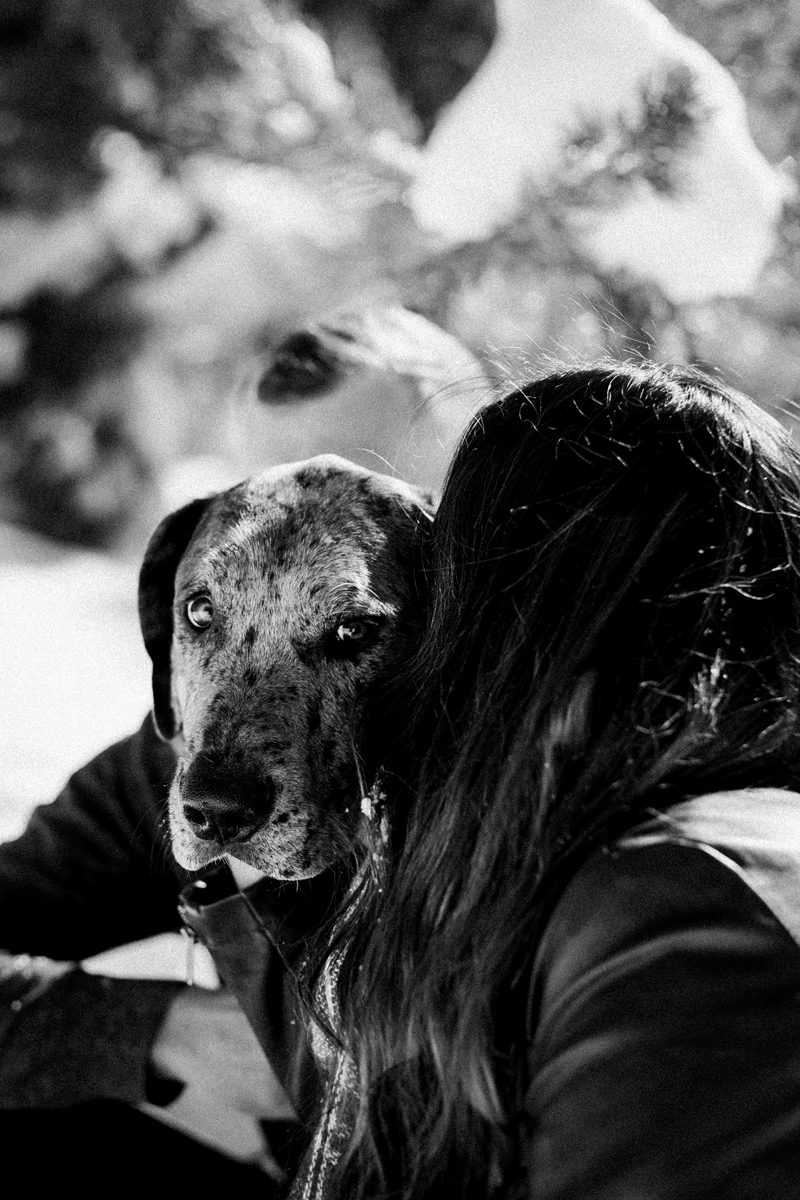 You can see more of this dog-friendly maternity session in South Lake Tahoe on Debra’s blog.

If you are looking for a dog-friendly photographer, check our Photographer Directory.

About misterdebs Photography:  Based in the San Francisco Bay Area and Sonoma County, Debs specializes in portraits and wedding photography.