Although many of us wish we could save every stray pet we see, that isn’t realistic. Still, we try to help out when we can. Often, a  story about a homeless dog will touch my heart. I am tempted to donate to the cause, but I’m also worried that it is a scam.

CUDDLY sponsored this post. All photos courtesy of Loving My Company.   Warning:  We only feature happy photos on the Daily Dog Tag, but the link in purple leads to a page that has some graphic images of injured animals that CUDDLY is helping.

So, I was happy to learn about CUDDLY:  a crowdfunding platform for animal rescue organizations.   Not only does  CUDDLY feature adoptable pets, but you can also safely donate to help a specific pet or a shelter because each recipient has been vetted.

CUDDLY even allows you to donate money or something off an injured or ill animal’s wishlist, such as toys, treats, or a bed. One of the many pets featured on Cuddly is Allie. She reminds me of my sister’s dog, Franny.

Franny lives with my sister, Alice. Although my sisters and I have had many dogs between us, we agree that Franny is the best dog ever. While I adopted a couple of my dogs from the shelter, they were puppies, not adults. Franny inspired me to adopt Theo, and now I think I will only adopt adult dogs in the future. 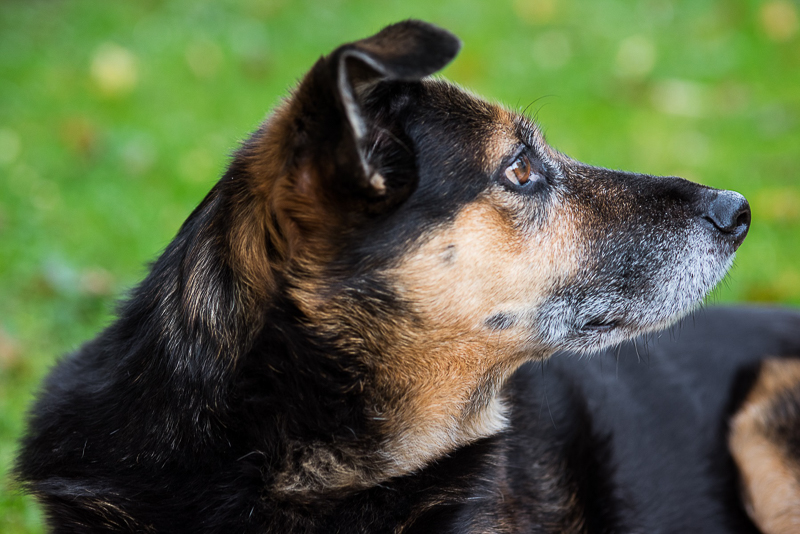 Beautiful Franny has an interesting past, although we only know a little bit about it.

A vet volunteering for the Rural Area Veterinary Services in Arizona rescued Franny. However, Franny and another dog escaped from the vet’s backyard the day they arrived in Los Angeles. Alice found Franny and the other dog walking the streets of LA; Alice was able to locate the vet who initially rescued Franny. The other dog already had a vet student waiting to adopt her, but the vet was looking for someone to adopt Franny, so Alice and her Pug Lulu welcomed her into their pack. Soon after adoption, it was discovered that Franny had a rare, life-threatening condition. The vet that had rescued her originally was kind enough to treat Franny pro bono. Luckily, the treatment was successful.

We don’t really know the details of Franny’s life, but Cuddly asked us to imagine Franny telling her story now. 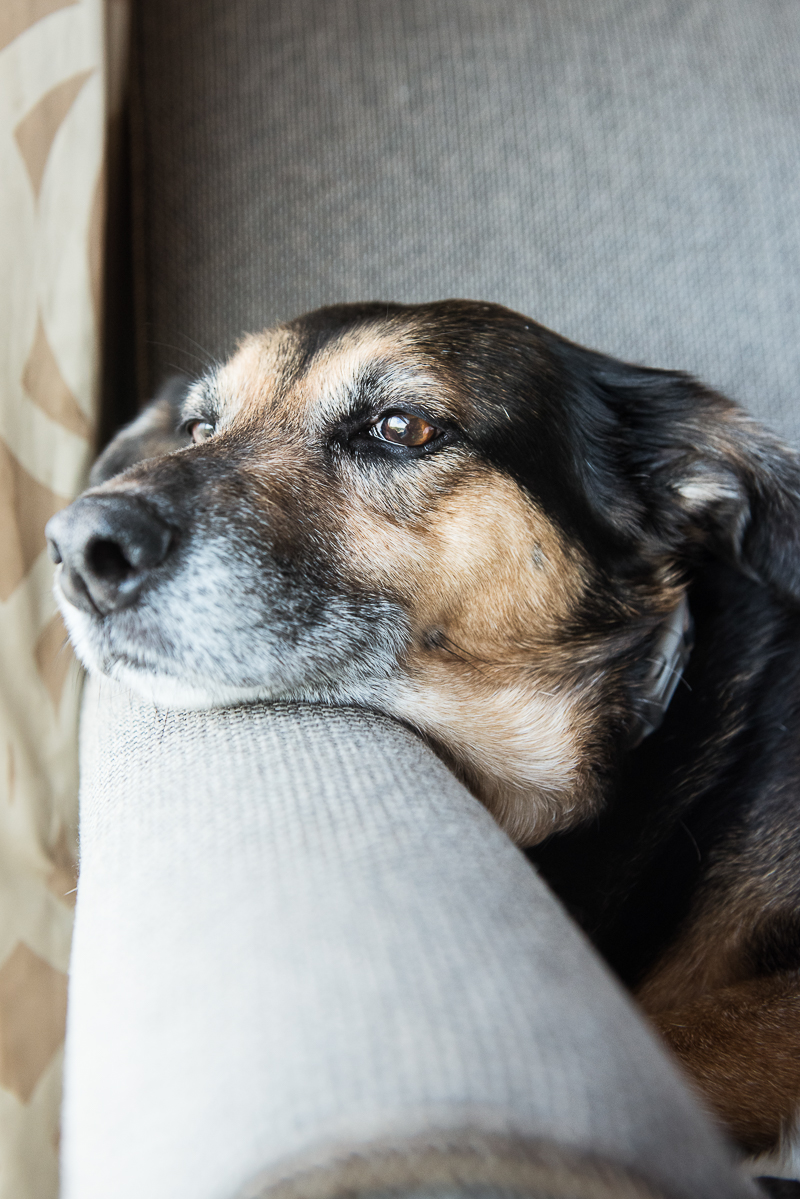 From Franny: “In my youth, I was pretty independent. Not that I wanted to be, I didn’t have a choice. I often had to fend for myself, finding food wherever I could, not only for myself but also for my puppies. Of course, my puppies were the smartest, cutest pups in the world.   Even though I was just a pup myself,  I loved them all and took great care of them!

You can bet that I was a great hunter, but occasionally, I was a scavenger during tough times. I had plenty of room to roam, and I saw a lot of things: some good, some not so good. One of the things I learned the hard way is that people are weird about their trash. One day someone took issue with me going through their garbage and shot at me with a BB gun. If it is so precious, why were they throwing it away? Did they really have to shoot at me? RUDE! I still have a BB inside me that reminds me of how eccentric people can be. Physically, I recovered from that incident pretty easily, but maybe that’s why loud noises scare me.

A kind vet transported me from my original home in rural Arizona to Los Angeles, California.   I was so anxious to start my new life that I escaped out of the vet’s backyard. My forever home was out there waiting for me. I walked into Alice’s life more than twelve years ago. She spotted my friend and me walking the streets.   Before I even laid eyes on her, I knew she was my person. And I was okay sharing her with another dog, Lulu.

After fending for myself for so long, I had some minor food aggression issues, but once I figured out that there was enough food for all of us, the issues disappeared. Lulu, the Pug, gave me the cold shoulder at first. But after a month, we became best friends. 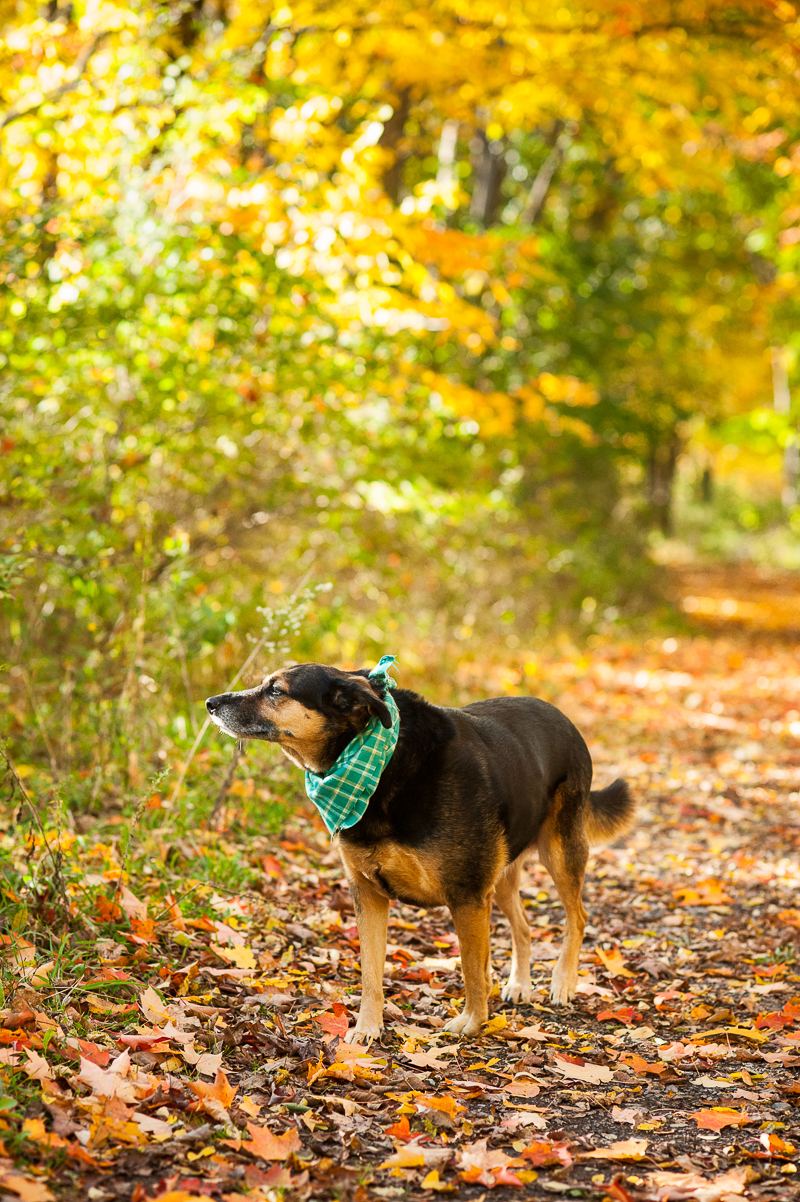 We moved far away from Los Angeles to Central New York. While I love being outside in the summer and fall, winter is another story. I find it best to spend as much of the winter in a comfy spot inside. 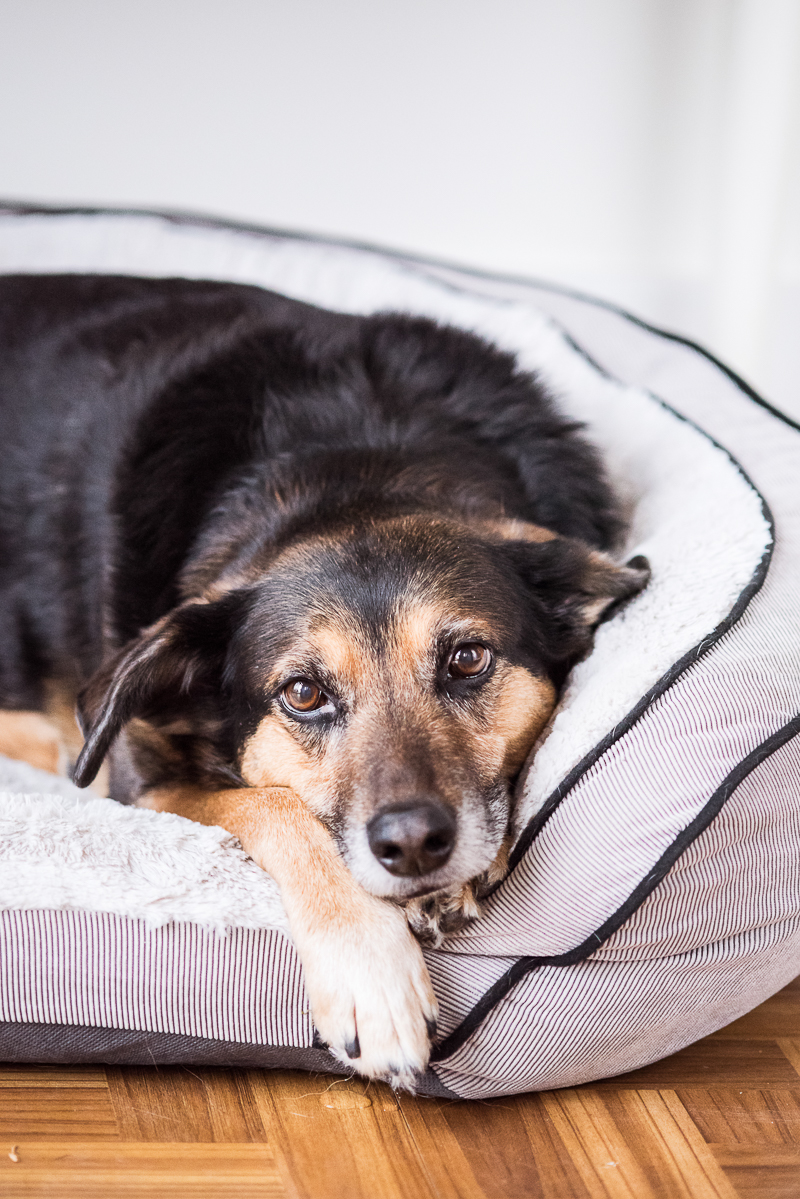 If you want to know the most comfortable place in the room, just look for me. I am always there! 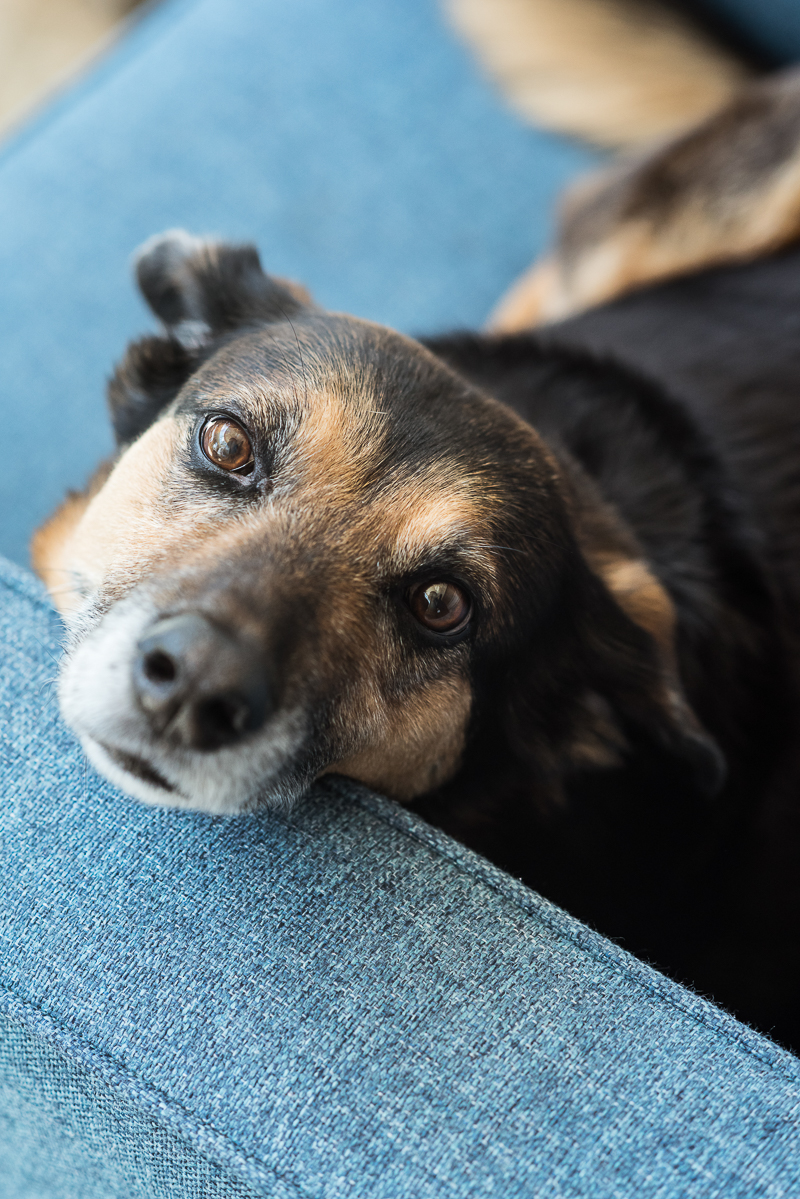 While my sidekick Darla barks at the squirrels and birds, I never do. I could still catch them easily if I wanted to, but now that I’m living the good life, I feel sorry for them. I know how tough it is when you don’t have a loving human to feed you. 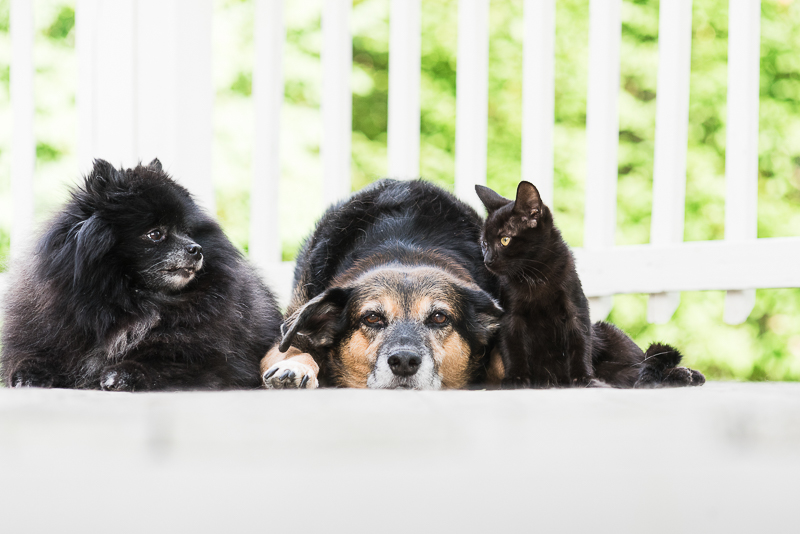 Just over two years ago, Alice found a little stray kitten on the highway. Of course, she had to take him in. He had some special needs, and I kept a close watch over him. With my love, he’s flourished into a handsome cat and good friend.” 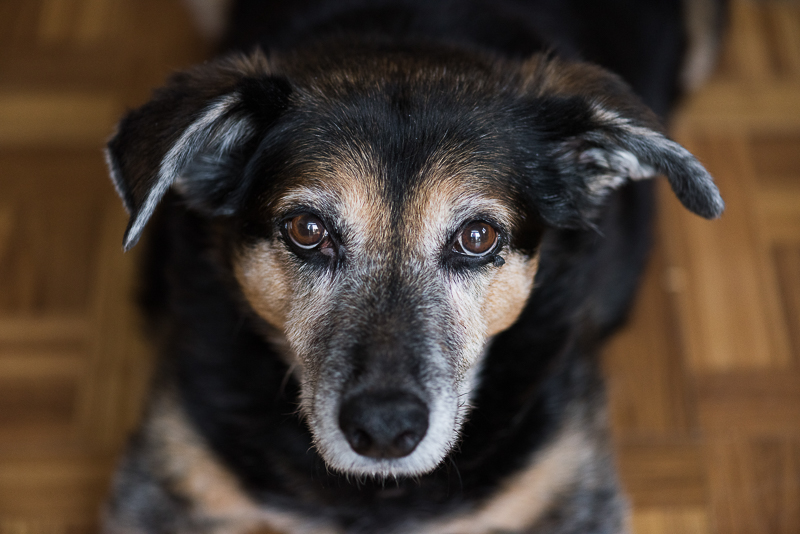 From Alice: “Franny opened my heart to the importance of rescue work and second chances for dogs with health issues. She has been given three life-saving moments in her 14-plus years. In return, Franny has simply and quietly just  been the best dog.”

Allie’s story reminds me of Franny’s, and I hope she has good luck finding a forever home like Franny did.

If you can’t adopt another pet now but want to make a difference, consider donating to CUDDLY. Additionally,  CUDDLY  has some great gifts for animal lovers. It is an awesome way to make someone happy and help needy pets at the same time.

I’d love to know your pet’s unspoken story! Please share on Instagram and Twitter, and use #MyUnspokenPet.  CUDDLY is offering a grant to a rescue that gets the most tags on social media with #MYUNSPOKENPET stories.

About Loving My Company:  Based in Syracuse, New York, Alice specializes in photography for creative entrepreneurs and is teaching her unique business model to other photographers.