As you might imagine, I read a lot of stories about dogs.  Not fictional stories, but short biographies of dogs who have touched someone’s, heart.  When I read Alani’s story, I felt so many emotions:  sad, angry and ultimately, happy.   Photographer Jamie Lucido sent in these photos of her dog, Alani.  Alani is a Great Pyrenees or a Pyr mix. 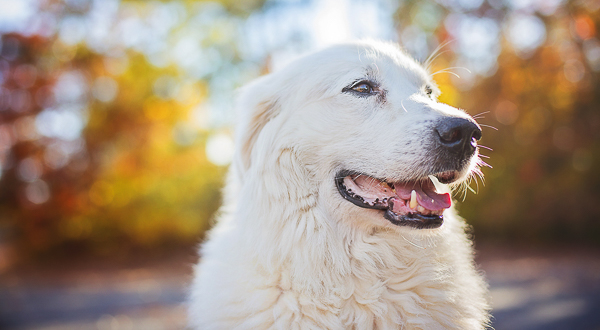 From Jamie:  “I was casually looking for a dog, and had been browsing Petfinder for a Golden Retriever when I came across her picture.  A puppy named ‘Regal.’ She was noted as a ‘Golden Pyrenees’ and had the most engaging eyes and white fur; I couldn’t help but be curious about her.  On my lunch break, I went to the shelter thinking I was just going to stop by quickly and see what her situation was. It was a shelter I hadn’t been to before and was horrific. It was a very loud echoing warehouse of a building with over a hundred chain link ‘cages’ side by side in aisles. The smell was assaulting, and it seemed that every dog in there was barking and throwing themselves at the cages.
My heart broke for each of them, as I was led down the aisle to ‘Regal’s cage. It was in the very back; the attendant warned me that she might not be adoptable because she was showing signs of aggression and sickness. I wanted to see her, despite their warnings. When I got to her cage, I literally dropped to my knees.  She was huddled in the back corner of her cage, food untouched, shivering, not barking, and with such soulful eyes, looking at me pleading for help.

I asked to get to know her, and they shrugged their shoulders, saying I could see her in a private room if I really wanted to.   They got out a metal rod neck leash, hooked it around her, and dragged her on her back towards us. They ushered her through the aisle of barking, hysterical dogs, to a private sitting room, where the noise was somewhat muffled. I think we were both shaken up by the simple task of getting from her cage to the room.

My heart was beating, and I was nearly in tears, as the noise and emotion of all those animals, in comparison to her quiet shuddering was just heartbreaking. The attendant had to help someone in front, and left us in the room for 10 minutes. I sat on the floor, not looking at her directly, not wanting to scare her, just waiting for her cues. It took about 3 minutes, but she slowly worked her way over to me and nudged my shoulder with her nose. It was only then that I really looked at her.  She was filthy, although a white dog, she was matted with dirt and blood, and looked to be sick by the watering of eyes and nose and cough.

But her eyes– I swear, she was speaking to me so clearly with those eyes, asking for an angel to rescue her. She quietly laid down next to me, looking up the whole time, offering her emaciated body, her matted fur, her love, and fear.  By the amount of blood, and the look of her underside, I realized she had just had puppies.  That was it; I had to help her. When the attendant came back in, I immediately let her know I wanted to adopt her.  I had cats at home, and they warned me that she might have issues, might be aggressive, might not be adoptable. However,  I was set and wouldn’t be dissuaded.

I paid $64, and they gave me a rope leash.  Alani and I walked out into the sunshine together.  She hopped up into my car, and we drove directly to a pet store to get bedding, food, cleaning supplies, and toys. Alani meekly stayed at my side during the trip to the store, and when I let her into my house, we went straight to the bathroom.

I kept my cats in another area of the house for safe keeping until introductions were made.  In the bathroom, as I washed her, she began to cry. Full on dog-crying, and for a moment I wondered if this was a safe idea, after all here I was in the bathtub with her, not knowing if she’d bite me from the stress of being bathed, which she obviously wasn’t used to, or what was going to happen.  She cried the whole time, and I cried too once I realized how deathly thin she was. 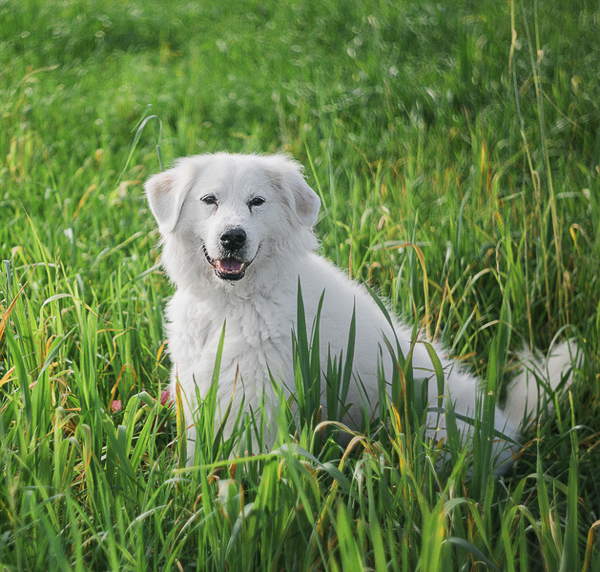 Great Pyrenees have very thick fur, and it was hiding the fact that she was literally fur and bones. I could feel each of her ribs, her hip bones, her spine; I had never seen such a malnourished dog.  And at the end of the bath, I dried her with towels, gave her water and food and some time to relax, and began to make a plan for her recovery.   (And I also called work to let them know I would be out the rest of the afternoon).

That first month we went to the vet several times, slowly getting her back to health from multiple chest, ear, and skin infections, getting spayed once she was healthy, and trying to put some weight on her.  We went on twice daily walks around the neighborhood, she became companion and protector of my two cats and learned to bark.

The first year, I found out about her triggers: red diesel trucks made her wild with fear, she became very protective when men were near, and didn’t give her trust easily. But she loved me, and became a huge joy in my day; I looked forward to our walks and the children who would run up to her and want to pet her because of her unusual appearance. The seventh year I had her, I had children of my own. Even though she is still protective around men, I knew she would be okay with my kids, and protect them as she did my cats and the neighborhood children. 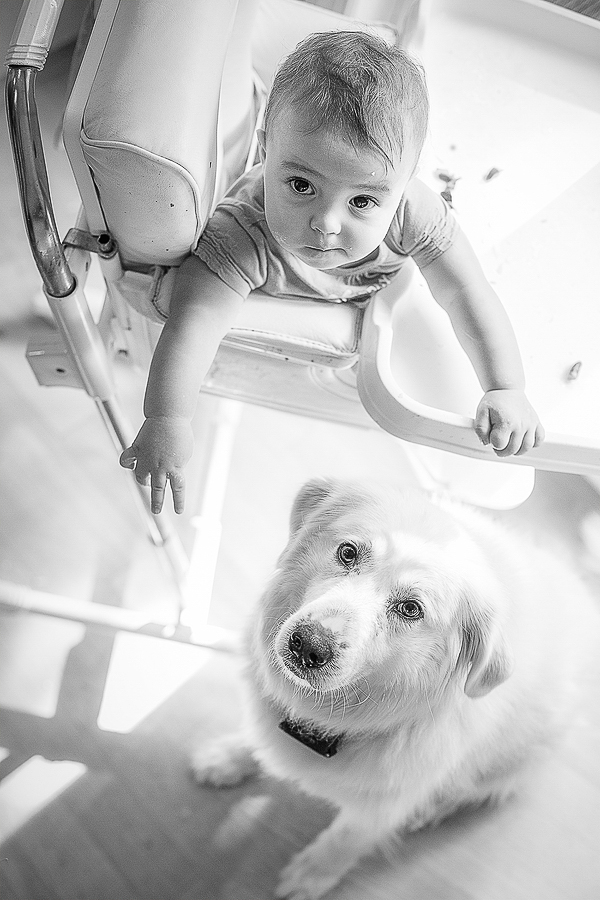 Sure enough, this sweet dog took to them as her own, and the bond they have is incredible. 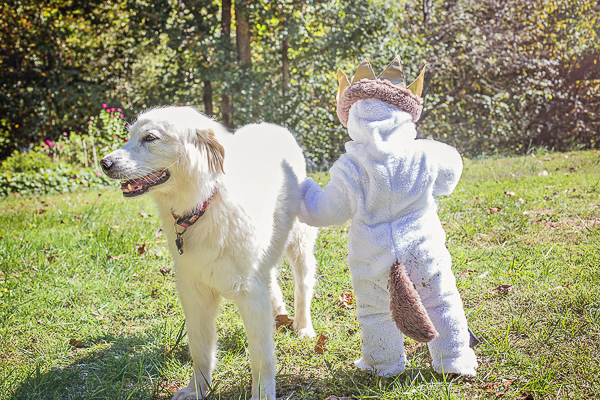 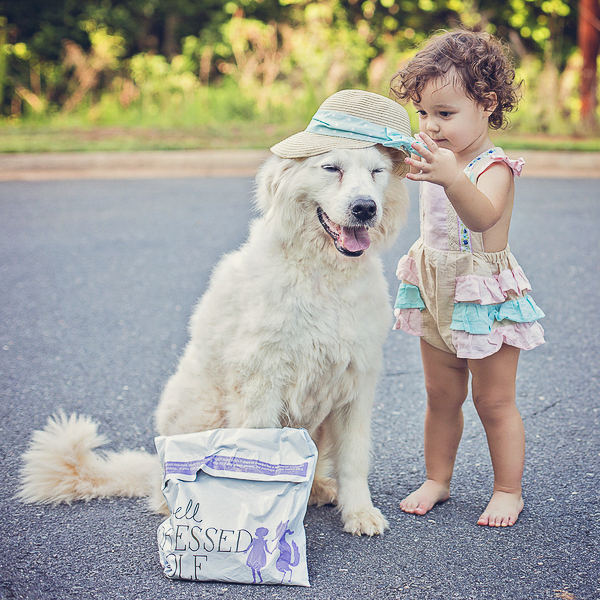 She is a ferocious barker when it comes to people knocking at the door, but is the most gentle, patient creature when it comes to whatever antics my kids think up.  I don’t know how old this dog is; she certainly wasn’t a puppy.  Maybe 2 or 3 when I got her.  And it has has been almost nine years, so I know she is getting older although the only evidence is in her eyes. She is very small for her breed, and even with constant yummy meals never reached above 60 pounds. I wish I knew what her story was before me so that I could heal those long lasting scars, but she has had a great life with my kids and me, and I am so happy I found her that long ago afternoon. 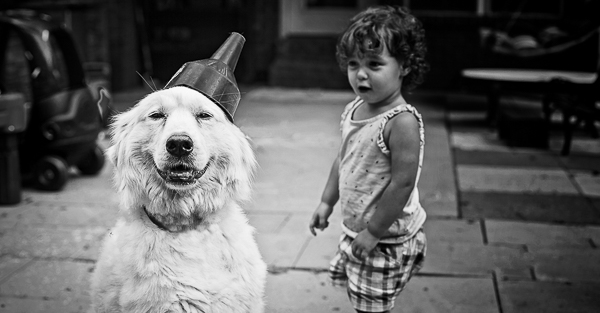 Rescue dogs are so often misunderstood, I can’t imagine what would have happened to this sweet creature, had I not walked in to find her, and offered the sympathy and patience she needed that day.”

I’m sure that Alani is forever grateful that Jamie brought her home that day too!